Since its inception, RECOFU (and previously RWEYOWA) has helped over a hundred orphans with schooling and material support, provided sustainable livelihoods and skills training for over 70 families and supported over a hundred of the most vulnerable people in our community with HIV/AIDS to access the most basic of necessities such as food, clothing and healthcare. Below are some of their stories: 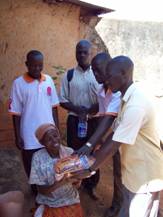 My Name is Lillian Nakitto. With the notable exception of prayers, I don’t have anything to give to RECOFU in appreciation of its support to me and my family in general.

My only daughter and son died of HIV/AIDS in 2006 and 2008 respectively, and am looking after two grandchildren.

I cannot forget the wonderful care and support which RECOFU provided to my son before his death. I did not know how to access free HIV/AIDS treatment and it is RECOFU which referred my patient to Mildmay Uganda for effective treatment. Furthermore, RECOFU continued to provide HIV/AIDS counseling, treatment adherence and nutritional support to my ill son up to the last minute of his death.

Since HIV/AIDS does not heal, I believe that my son died happily with lots of appreciation to RECOFU, which did all it could for the life of my son who passed away in September 2008.

In addition, I and my grand children are still receiving support from the organization to survive. Both of my grand children are under RECOFU’s sponsorship program since I don’t have any source of income. And I am very happy about that because I believe that the most important gift one can give to a child is education.

As a family, we receive whatever nutritional support RECOFU can afford under its community outreach program which I am very happy about.

May the almighty God bless this organization in all its endeavours to help vulnerable people in the community!

I really appreciate the treatment and nutritional support which I consistently receive from RECOFU. Sincerely, I was dying of AIDS and Tuberculosis unknowingly, until RECOFU referred me to Mildmay for free voluntary counseling and testing. I tested HIV positive and with the support of RECOFU, I accessed free treatment and I have recovered tremendously.

I also receive nutritional support under RECOFU’s community outreach programme, as a means of complementing the antiretroviral treatment.  If it was not for this organization, I would be dead.

RECOFU is my life. Without it, I would not be alive. I dedicate all my prayers to the founders and supporters of this organization!

Namuli Erinah is an orphan who is succeeding in school thanks to RECOFU. Learn more about our Orphan Support Programme and other work here. 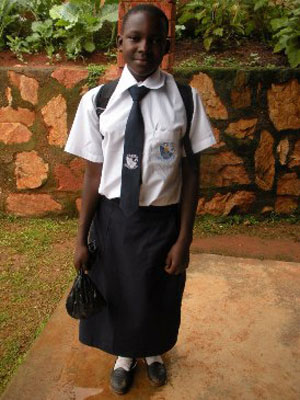 I am by the names Namuli Erinah. I studied my primary level at St. Elizabeth Primary School, Namasuba.

I can’t remember the year when my mother died and my father died in 2007. I am now living with my grandmother.

After the death of my father, my grandmother had a problem of school fees and I started not going to school. When we told the RECOFU people, they started helping me by paying my school fees and giving me books.
They changed me form St. Elizabeth Primary School to Namasuba Parents School which has a good standard and I got a 1st grade in Primary leaving examination (P7).

Because of my good performance, the RECOFU people gave me a good secondary school called Kawombe Memorial School, which I like so much.
I thank RECOFU for paying my school fees, giving me transport to school and other things of mine from primary five and I am now in senior one.

I promise to continue working hard. I am now happy because I go to school every day.

Iradukunda Yvonne is an orphan who is succeeding in school thanks to RECOFU. Learn more about our Orphan Support Programme and other work here.

I am by the names of Iradukunda Yvonne Sandra. When I was still schooling at Mirembe Primary School, life wasn’t that easy. I could walk very long, long distance to school and sometimes could be late for morning classes and punished for late coming.

After the death of my father, my mother started struggling getting me school fees.Through God’s help we found RECOFU which helped me to get a nearby school called Namasuba Parents School. They started supporting me in 2008 and RECOFU people paid my school fees up to primary seven.

I sat for primary leaving examinations and I got a 1st grade with 7 points. This made RECOFU people happy and they got me a secondary school called Kawombe Memorial School and I am very happy because it is a very nice school. I am in boarding section.

In midterm exams I was 1st out of 95 students. When it came to end-of-term exams, I became the 5th out of 95 students which also encouraged me to work so harder and harder. Am now heading to second term and I will continue praying for RECOFU.